How the graphics were created for Netflix’s Love, Death & Robots animated series Bunker

Although the second season of the animated anthology Love, Death & Robots was noticeably shorter and worse than the first collection, some episodes literally struck with quality photorealistic graphics. And Netflix have decided to talk more about the filming process of the new series in general and the Life Hutch / The Bunker issue in particular.

Interestingly, at this stage of filming, studios still need a real-life prototype character (in The Bunker, for example, it’s actor Michael B. Jordan), but eventually the industry may come to a tipping point where the need for expensive (and often troubled) actors will disappear altogether.

As a reminder, the first season of Love, Death & Robots premiered on March 15, 2019 (18 episodes) and the second season premiered on May 14, 2021 (8 episodes). The third season of the anthology will be released next year, so the wait won’t last as long as it did between the first two seasons. 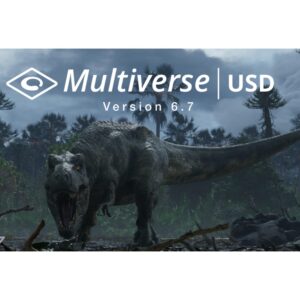 Multiverse | USD 6.7 received support for blend shapes in USD format, which in turn allows you to write assemblies that are used by the