Metashape 1.7 has been released.

Agisoft has released Metashape 1.7, an update to its photogrammetry software. Users of the professional version, designed for aerial photography, get integration with terrestrial laser scanning data, automatic detection of power lines and a new system for automatic masking of blurred areas of the original images.

Agisoft’s software was originally known as PhotoScan and quickly became popular among game and visual effects artists for creating three-dimensional images of people or objects from reference photos.
The resulting grid can be exported to a number of standard formats, including OBJ, FBX, Alembic and glTF with HDR textures and UDIM support.

After Agisoft began to focus more on aerial photography in the professional version of the software, the product was renamed Metashape. 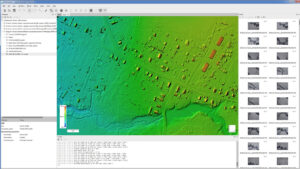 Other performance improvements include out-of-core point cloud processing, which speeds up the processing of datasets too large to fit in GPU memory, and the ability to zoom out on textures.

The Professional version has received a number of other important new features, including support for ground laser scan data, allowing it to be matched to photogrammetric data created by Metashape.

Users can then reconstruct the depth information, which should fill in the gaps in any dataset and lead to a more detailed final grid.

Based on the artificial intelligence-based land use classification system introduced in Metashape 1.5, the software can now automatically detect power lines on aerial photos and export the corresponding three-dimensional polyline.

In addition, the new automated system generates masks for out-of-focus areas of the original images, preventing them from being used to create textures.

Metashape 1.7  is available for Windows 7 and later, Debian/ Ubuntu Linux with glibc 2.13 or macOS 10.13 and later. The standard version costs $179 for a node-linked license, the Professional version costs $3,499. The software has GPU acceleration using OpenCL and supports AMD and Nvidia graphics cards.